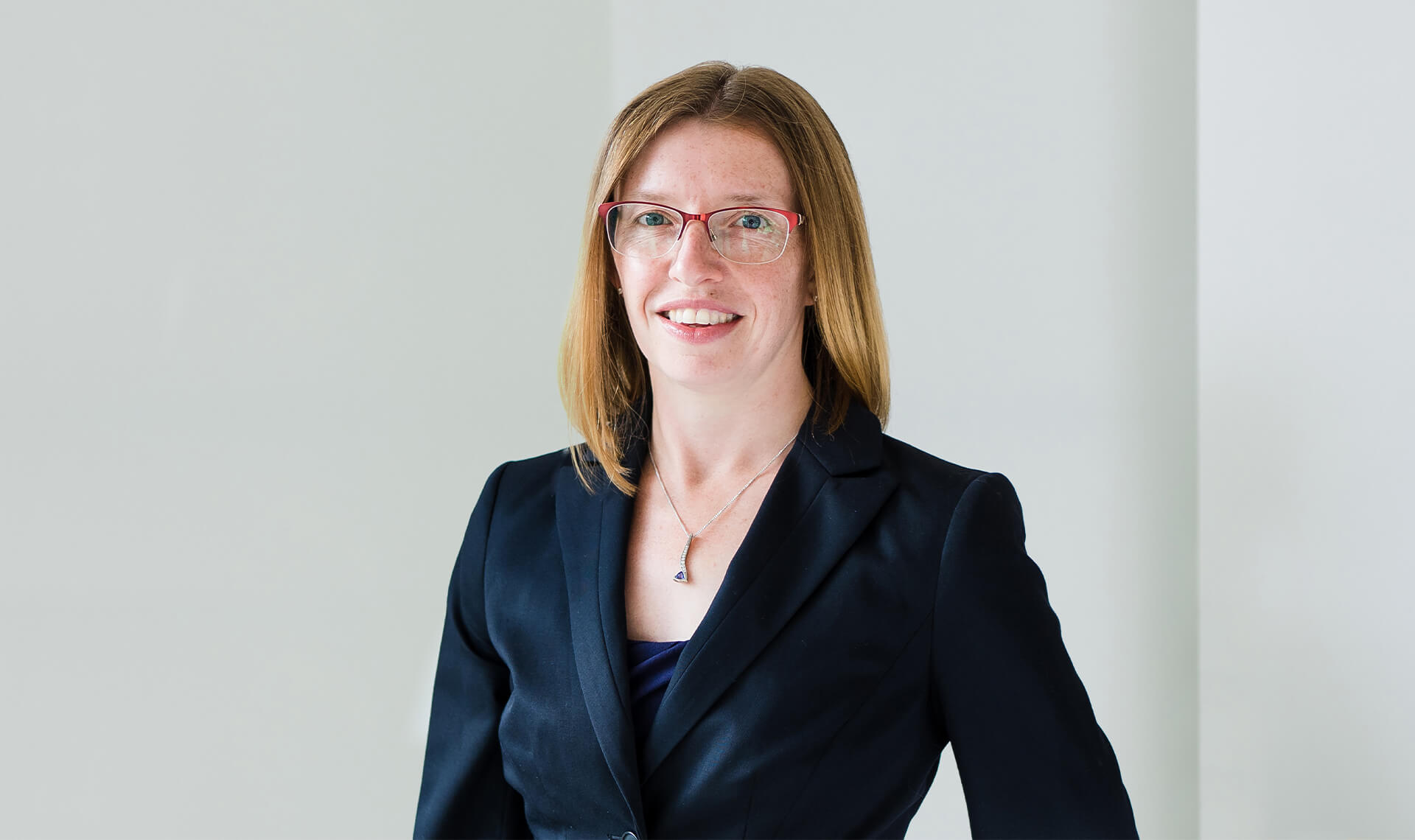 Alexia is an experienced specialist commercial senior junior, with substantial experience in the fields of banking and financial services, civil fraud, general contractual disputes, and professional negligence. She is regularly instructed to advise and act for clients seeking, or facing, injunctive action and NPOs.

Alexia is ranked as a Leading Junior in Commercial Dispute Resolution in the Chambers & Partners UK Bar guides for 2021 & 2022:

"Alexia is excellent at picking out the key issues in complex matters and is very tenacious. She is an excellent all-rounder."

"Very good at both advocacy and written work."

"A cool, calm and collected advocate."

"She is very clever and grasps everything very quickly."

Alexia is ranked as a Leading Junior in Banking & Finance in The Legal 500 UK Bar 2022:

"Very approachable and friendly. Gets to know you as a person as well as an instructing solicitor. Extremely knowledgeable and all over the detail."

Alexia is a strong advocate, having independently successfully handled over 20 trials, as well as numerous heavy applications and urgent injunctions. Consequently, Alexia skilled in making difficult tactical calls under pressure.

Alexia's experience as a sole advocate includes retail banking and general commercial trials and appeals. Recent victories include the first instance decision in Philipp v Barclays Bank UK Plc [2021] EWHC 10 (Comm) [2021] Bus. L.R. 451, a successful trial for a leading bank in a seven day trial (concerning a hedged loan, alongside allegations of duress and undue influence and limitation defences); a strong settlement mid-way through a three day trial of a possession claim (raising issues including assignment, undue influence, statutory unfairness, estoppel and late amendments); and a successful 3 day summary judgment application against a silk in a multi-party commercial sale of goods/misrepresentation claim. Having been led by Patrick Goodall QC in the Court of Appeal in Philipp [2022] EWCA 318 [2022] 2 WLR 872, she is now led by him in Barclays’ application to the Supreme Court for permission to appeal.

Alexia also has a substantial background of litigating consumer and retail banking claims, including disputed guarantee claims, Limitation Act 1980 battles, and acting in both legal and equitable possession proceedings. She is the writer of Chapter 13 (Security) and Chapter 17 (Mortgages of Land) of the new edition of Paget’s Law of Banking (December 2018) and of the chapters on Rescission and Rectification in Bullen, Leake & Jacob's Precedents of Pleadings.

Alexia prides herself on working as a team with her instructing solicitors to achieve the best result for the client, whether in an urgent interim application or in a longer trial, and whether as a sole advocate or as part of a larger counsel team. Alexia acted for David Rowland in Wright v Rowland (led by Ali Malek QC, and including a dispute as to the role of costs budgets [2016] EWHC 2206 (Comm)) in a multi-million pound commercial court claim; and was led by Gregory Mitchell QC in Albesher v Ryan [2016] EWHC 541 (Comm), a claim against Credit Suisse (and others), alleging fraudulent misrepresentation, dishonest assistance in breach of trust, and a breach of a bank guarantee. She has been led by a number of other silks in Chambers, including Andrew Onslow QC, David Quest QC, Jonathan Davies-Jones QC in Gestmin SGPS SA v Credit Suisse (UK) Ltd [2013] EWHC 3560(Comm), Andrew Fletcher QC, John Jarvis QC and Andrew Sutcliffe QC.

“Very approachable and friendly. Gets to know you as a person as well as an instructing solicitor. Extremely knowledgeable and all over the detail.”

Alexia is an experienced sole advocate, who is regularly instructed by banks and other financial institutions and lenders. She has long-standing experience of fraud claims, from “old school” cheque fraud, through to both push payment fraud and APP fraud. She acted as sole counsel against a silk in Barclays’ successful application for summary judgment Philipp v Barclays Bank UK Plc [2021] EWHC 10 (Comm) [2021] Bus. L.R. 451. She was led by Paddy Goodall QC in the Court of Appeal, and is led by him in the bank’s pending application to the Supreme Court. Following on from this, Alexia has substantial experience of Quincecare duties, as well as associated issues of knowing receipt and unjust enrichment.

As sole counsel, Alexia has substantial experience of retail banking trials and appeals, and interim applications. Throughout her case-load, her skills as an advocate enable her to take a robust and forceful stance in an approachable and judiciary-friendly manner. She is skilled in disputes arising out of finance documents, including securities such as mortgages and guarantees, undue influence, negligent advice, as well as equitable and restitutionary claims.

Alexia’s experience also includes advising and acting in relation to allegations of mis-selling of interest rate and currency products, together with issues arising from s.14A / s. 32 of the Limitation Act 1980, basis and “no oral variation” clauses, and LIBOR allegations. She has significant experience of disputed guarantee claims, of possession proceedings (including equitable claims), orders for sale, and of claims arising from receiverships and allegations of sales at an undervalue. She has notable experience in obtaining Norwich Pharmacal Orders.

In addition to acting in trials and interim applications on her own, Alexia has also acted as junior counsel in more substantial banking and finance claims. As a junior, she has been led by Gregory Mitchell QC in a multimillion pound claim against Credit Suisse, alleging fraud, dishonest assistance in breach of trust, (and claiming under a bank guarantee); has acted for the provider of bridging finance in a claim in which Andreas Gledhill QC also acted for the lender; and has also been led by other members of chambers including Ali Malek QC, Andrew Onslow QC, David Quest QC, Jonathan Davies-Jones QC, Andrew Fletcher QC, John Jarvis QC and Andrew Sutcliffe QC.

Alexia is also a regular provider of talks and legal updates, particularly in the field of finance litigation.

She is the writer of Chapter 13 (Security) and Chapter 17 (Mortgages of Land) of the new edition of Paget’s Law of Banking (December 2018) and of the chapters on Rescission and on Rectification in Bullen, Leake & Jacob’s Precedents of Pleadings.

Examples of Alexia’s recent cases include:

Alexia is ranked by Chambers & Partners: UK Bar 2021 as a Leading Junior in the field of commercial dispute resolution.

“A cool, calm and collected advocate.”

“She is very clever and grasps everything very quickly.”

Alexia an experienced commercial advocate, and a senior junior who increasingly acts against silks in interim applications and trials. She represents clients both large and small in a wide range of commercial contractual disputes in different fields, and has particular familiarity with contractual issues arising in the fields of IT, employee fraud, sale of goods, and share sales.

Alexia routinely acts in matters of commercial fraud, both independently and as junior counsel. She has successfully represented clients and obtained without notice injunctive relief in highly contentions proceedings, restraining the defendants from a physical take-over of a network of petrol stations. Alexia has also recently acted, against a silk, in an injunction application against her client to restrain a share sale said to have been triggered by a floating charge. Alexia acted, unled, in obtaining an injunction and Anton Piller/search order relief (without notice) in the Chancery Division, and in making an urgent out of hours application, in a case of employee data theft. In her sole capacity she regularly advises clients on both sides of applications for freezing injunctions, search orders, NPOs and injunctions to restrain the presentation of petitions.

Particular current and recent experience of note is set out below:

Alexia regularly acts in matters of commercial fraud, usually independently but also as junior counsel. She is experienced in advising both sides of applications for freezing injunctions, search orders and NPOs, as well as general injunctions, for example to restrain share sales or the presentation of petitions.

Alexia regularly acts in matters of commercial fraud, usually independently but also as junior counsel. She is experienced in advising both sides of applications for freezing injunctions, search orders and NPOs, as well as general injunctions, for example to restrain share sales or the presentation of petitions.

Alexia is routinely instructed in general insolvency work, including appearing as an advocate in contested winding up and bankruptcy petitions and applications to set aside statutory demands, and related appeals in the High Court.

Alexia also has regular experience of dealing with injunctions to restrain winding up proceedings.